It isn’t very often you get to pass a milestone like this. Here at MW Marine, we’re proud to be making a part of Jeanneau’s storied history by celebrating our 10th anniversary with this illustrious company. In 2011 we were appointed the NSW agents for the company, and it’s an honour to work with a world leader in the boat building industry.

In their boatyard in Les Herbiers, France, they produced the classic Alize, Love Love, and Sangria Sailboats through the ’60s and ’70s and made history in 1976 when the Melody entered a single-handed trans-Atlantic race, proving that a production boat could cross the ocean.

It wasn’t until the 1980s that Jeanneau, now a force to be reckoned with in the world of powerboat racing, would launch the iconic Cap Camarat range.

This “4×4 of the seas”, as it was affectionately referred to back then, became known for its amazing seafaring abilities, and is now a standard for powerboats. In 1981 the Cap Camarat Niger 510 went on to take 1st place at the African Nayamey Bamako Rally. In 2nd and 3rd places, you guessed it two more Jeanneau boats.

Powerboats such as the Cap Camarat range alongside the Jeanneau Leader 33, are the exceptional quality that boat owners have come to expect when buying a Jeanneau.

MW Marine – A Legacy of Service
Matthew Willet founded MW Marine in 2010. His vision of a boutique brokerage has grown to become one of the larger dealers of Jeanneau’s in the Asia Pacific Region, winning awards for sales and service.

It’s our 10th Anniversary with Jeanneau and our marina has been privileged to know such growth and to have procured this alliance with a historic shipyard and boat manufacturer. It is surprising how quickly time flies when you have such a good thing going – but here we are, 10 years on and still working closely with the legendary service and quality workmanship Jeanneau is renowned for.

MW Marine is proud to be the boutique brokerage that brings these wonderfully elegant, exceptional vessels to our clients, and our Australian waters.

Jeanneau Where We Wanna Go?
With a relationship built on such a solid foundation as the history we share, MW Marine can offer customers the kind of support that only such a stable affiliation can bring. We can’t believe it’s our 10th Anniversary with Jeanneau but we sure are looking forward to celebrating another 10 years with this boat building icon.

MW Marine are an award winning Jeanneau dealer having represented the brand across Australia for over 10 years. When you purchase your new Jeanneau Inboard Boat through us, you’re getting more than just a vessel – you’re buying a lifestyle like no other!

Keep reading to learn more about what your future could look like on board a Jeanneau.

Your Private Escape On The Water
If we had to choose one word to describe the boating lifestyle it would be “freedom”.
Boarding your luxury Jeanneau Motor Yacht is like entering your very own private oasis. You get to enjoy the salty air, gentle breeze, and breath-taking sunsets that will make you forget all your stress and worries. Just for a little while, you’re the master of your domain with the freedom to go where you want, when you want with no strings attached.
Whilst many will spend their weekdays juggling workloads and deadlines, you’ll be dreaming about your next escape aboard your luxurious Jeanneau. Cruising through the pristine blue water of Sydney Harbour on a warm Saturday afternoon, the only thing you’ll really need to ask your guests is… “Jeanneau where you wanna go?”

END_OF_DOCUMENT_TOKEN_TO_BE_REPLACED

If you are searching for a cruiser that will guarantee your happiness on the water, look no further than the Jeanneau Leader 33. This impressive vessel has a sporty and sleek exterior combined with a spacious and functional interior – making it the perfect cruiser for a luxurious lifestyle and weekends on the water with friends and family.

Here is everything you need to know about the Jeanneau Leader 33!

Sporty and Sleek Exterior
This luxury cruiser has the Leaders classic look with a contemporary but sporty facade that’s sure to satisfy any boater’s taste. The stand out choice would be the sports top version that comes equipped with a hardtop that opens at the push of a button.

The long lines and open design ensure that you can entertain your friends and family in both comfort and style. The spacious cockpit was designed with room for everyone make you feel like you’re sitting in an attractive exterior living area, with aft bench seats that can transform into a sundeck in the blink of an eye! The Leaders hull provides exceptional style and comfort, which is the foundation of the brand’s reputation.

You can also take advantage of the swim platform, which is the perfect tool to enjoy swimming or snorkelling at Milk Beach within the Harbour.

Spacious and Functional Interior
When you purchase your new Jeanneau Leader 33, you are genuinely buying a cruiser with a spacious and functional interior.

The Leader 33 is equipped with two cabins and a saloon that can be converted to an outside entertainment area so that you can enjoy everything there is to love about lazy days cruising on the water. The impressive owner’s cabin has direct access to the heads, three berths, a dressing table, and a layout designed for privacy and comfort. The galley is well ventilated because it is located near the entry, and the L shape allows for various storage compartments throughout the cabin.

All interior living spaces are finished with high-end materials to ensure an elegant and luxurious appearance. This, combined with its ergonomic design for storage capacity, makes it both chic and comfortable!

END_OF_DOCUMENT_TOKEN_TO_BE_REPLACED 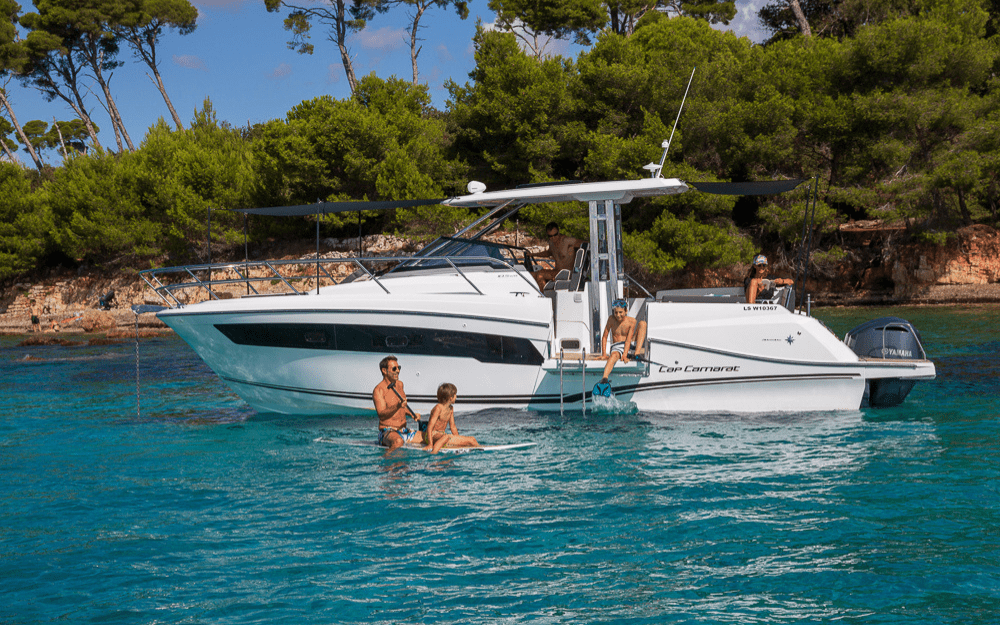 When you decide to sell your boat, working with a Marine Broker like MW Marine in Sydney can really make all the difference. Aside from knowing the industry inside and out, they can also provide you with professional marketing when it comes to selling your boat. Read on to find our top 4 benefits of professional marketing when selling your luxury boat.

1. Reach More Potential Buyers
When you decide to sell your luxury boat, reaching as many potential buyers as possible is essential to obtaining the best price and selling your boat quickly.
When you work with a marine broker you’ll have access to a wider reach of individuals that are interested in buying boats just like yours. They have experience and expertise relating to listing boats in the right place – at the right time – to maximise your exposure and get the sale completed quickly.
A professional marketing strategy that is often used is social media platforms. Social media is the most cost-effective way to reach potential buyers. At M W Marine, we provide program-marketing campaigns to utilise our base of followers to market your boat. This means that the description and images of your powerboat; motor yacht or cruiser will be uploaded to all of our social media channels to ensure that it catches the eye of the right buyer!

2. Get the Images of your Boat
They say an image is worth a thousand words and when you’re selling a luxury boat, truer words were never spoken! To effectively market your luxury boat, a marine boat broker will want to capture professional imaging, which will also include video. The quality of these images is important as they provide rich visual details about your boat and are used to capture attention. Essentially, these images really provide the viewer with an experience of your boat along with the lifestyle that may accompany it. For example, if you’re selling a motor yacht, the potential buyer might be looking for the type of vessel that is large enough to entertain friends over a weekend. Therefore, professional interior shots of bedrooms, bathrooms and the kitchen will be important along with any entertaining space that the yacht may offer. Professional imagery will really help to sell this boat as an entertainer and help it stand out from the crowd.
At MW Marine, we provide several different photography packages to capture the essence of your boat as if you were seeing it in person. Our experts will stage your boat during the photoshoot and edit the photos to make them clean, clear, and dynamic.
For example, our Bronze Package PLUS includes a 30-second video that showcases additional highlights of your boat, as well as docked and running shots. Upgrade to the Silver Package PLUS, and we’ll hold a 3-hour photoshoot that includes complete aerial photography taken by a drone and a commentated walkthrough of the vessel. This is the perfect marketing packages for those selling those larger cruisers.
Working with a brokerage like MW Marine in Sydney will provide you with access to expert marine photographers to ensure your boat is showcased in the best possible light. Remember, you can only make one first impression, so you need to make sure the photos you provide on social media and other marketing mediums are exceptional!

END_OF_DOCUMENT_TOKEN_TO_BE_REPLACED

This guide will give you some tips as to some of the best locations you can visit on your very own luxury boat, as well as what you can expect when you get there.